Golly but, that’s a strange spot to leave a solar panel…

Sydney reached  the longest cold streak for 140 years, and it looked like it might become the longest ever. But then a few days ago, after 331 days of cool weather, temperatures reached the magic 30.1C at Observatory Hill Sydney ending the newsworthy cold run.

Back in 1883 Sydney had 339 days in-a-row where the thermometer didn’t make it up to 30C (86F). Since then, five million people arrived, along with the Cahill Expressway, skyscrapers, and 100,000 cars a day, but even that, apparently, wasn’t enough artificial urban warming to reach temperatures of 140 years ago.

But Craig Kelly (former MP) has some footage from that famous site and asks “What’s going on here?” 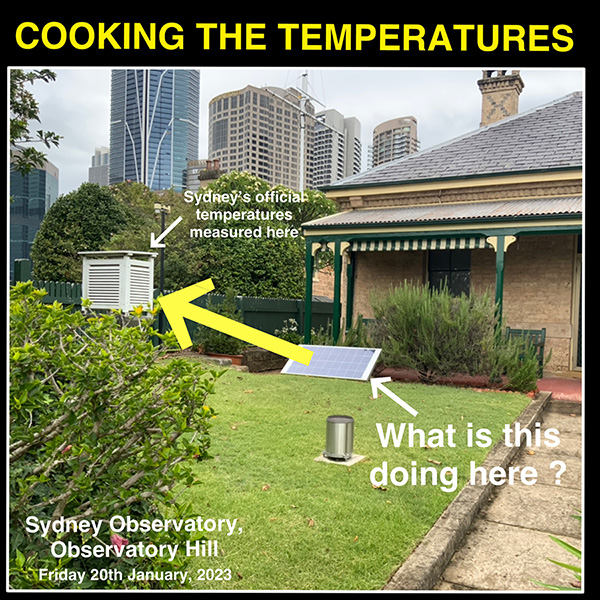 That’s a strange spot to leave a panel… | CraigKelly

It’s even more suspicious when looked at from above. The solar panel position (marked in red) is exactly due south of the Stephenson screen where the thermometer is kept (marked with an arrow). If, hypothetically, someone wanted to leave a reflective object pointed at the box at midday, that’d be the place to do it. (Midday of course, is 1pm Daylight Savings time.)

Note the 5m calibration mark on the bottom right. That solar panel is closer than that. 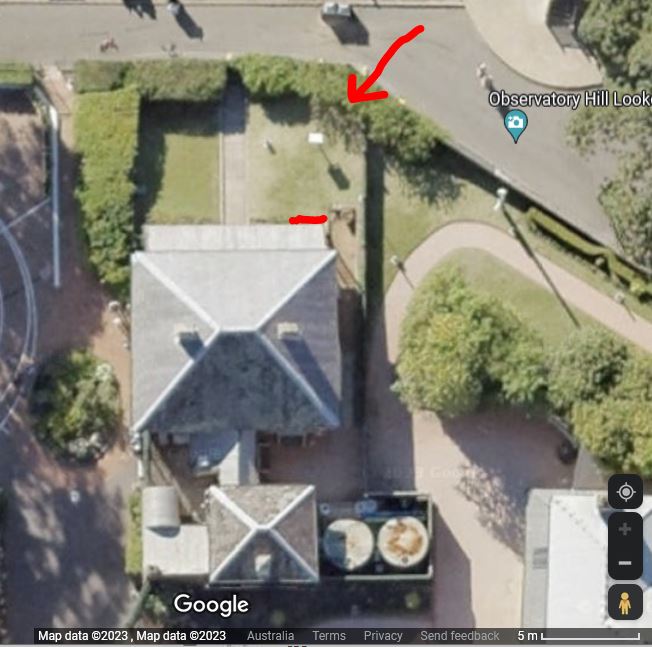 Five metres due south of the Stephenson screen…?    Google Maps

Someone has already done a backyard experiment, which is more than the million-dollar-a-day BOM has done. And it’s pretty obvious that sunlight reflects off a solar panel. But then, the Experts say the Sydney Observatory set-up is accurate to a tenth of a degree and we shouldn’t trust the non-standard equipment of 1883, because it doesn’t have solar panels lying around, I mean, it wasn’t standardized…

The same Experts also say that screens should have a 30 meter buffer zone cleared around them. Nevermind about that. Remember it was 30.1C on Jan 18th, so tell the world, right?

Note to the ABC,who’s full time meteorologist Tom Saunders, didn’t visit the site, this is what unpaid citizen journalists do. Will the two-million-dollars-a-day ABC find a moment to ask the BoM why the solar panel was there? Was it connected to anything, when was it “installed” and is it mentioned in the meta-data? Perhaps the panel was at the wrong angle, but if the BOM was an agency of science, it would want to know.

More importantly, if “climate change” is the greatest threat we face today, the BOM would act like temperature measurements matter.

As long as the BOM treats their sites like a joke, we know “climate change” isn’t science.

*It is of course, not a glass thermometer anymore but a PT100 platinum resistor, recording voltages. Thanks to Siliggy and we’ll have more to say on them later…