It’s been on the cards for sometime, but we now know that 2022 was the warmest year on the CET record. UK figures will doubtlessly follow suit.

There will the inevitable claims that this confirms both the UK and the world continues to get warmer. As far as the first is concerned, that is not the case, as the 10-year average remains virtually the same as it was in the early 2000s. In simple terms, we continue to see a pause in UK temperatures, which has now lasted for nearly twenty years.

As for 2022, the record high is actually well withing the bounds of normal variability. As the chart below shows, annual temperatures are frequently around 1C either above or below the 30-year average. Last year was 0.8C warmer than the 30-year average, whilst 2010, for instance, was 1.1C below. Both anomalies were the result of weather variability, not climate change.

As the top chart reminds us, there was a significant uptick in CET in the late 1980s and 90s. Given that higher climate baseline, it is inevitable that we will continue to see new record highs occasionally set, even if there no underlying increase in temperature.

The story of the year’s weather is told in the chart below: 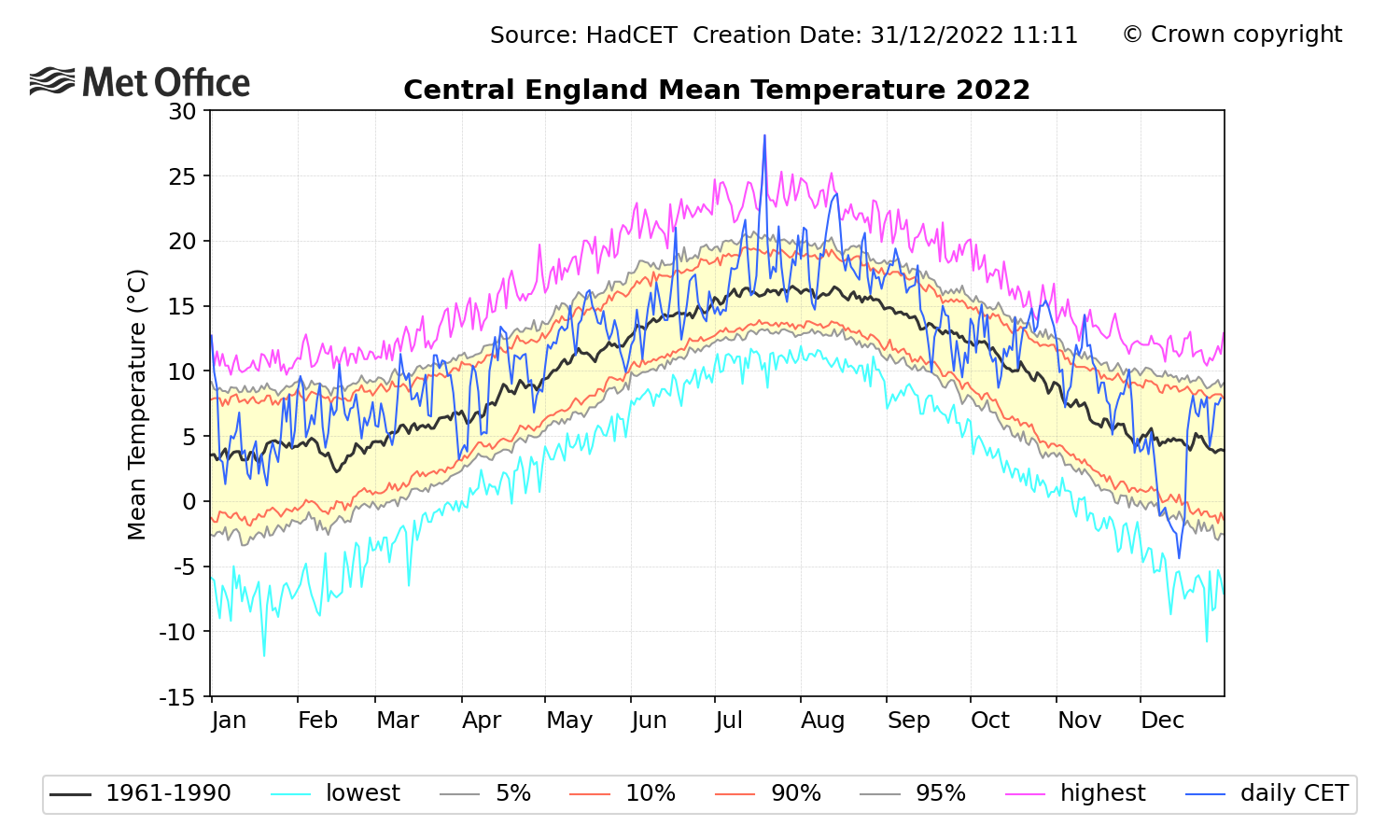 Most of the year saw temperatures in the top half of the range, but still within the 95th percentile. In short, there was a marked absence of colder than average weather, but no evidence of an upward shift in the temperature range as a whole which would be the case if there was a climatic shift.

We can break this down by calculating the number of days in each category for each month, based on percentiles of daily temperatures between 1991 and 2020:

Over the year as a whole, there were 29 days above the 95th percentile, the statistical average of course being 18, while 16 days came in below the 5th percentile. Extreme temperatures at either end of the scale therefore made little difference to the annual mean.

But by far the biggest impact was had by the 216 days in the yellow band, above the median but below the 95th percentile. That compared to just 104 days below the median.

Backing up this conclusion is the fact that no monthly or seasonal records were set last year, far from it:

On a monthly basis, there was not a single month which saw weather we had not had experienced before. Even August. which was the 3rd hottest, was 0.4C cooler than 1995. Most months, while warmer than average, were in no way unusually so.

We’ve looked at the numbers, but let’s look at the type of weather that lay behind them:

In a nutshell, we had just the sort of temperatures we would expect from the weather which we had. Sunny springs and summers invariably lead to high temperatures, whilst unsettled, wet conditions in autumn and winter usually bring mild weather.

There is no evidence in any of the above that 2022 is part of a longer term pattern of warming in the UK.